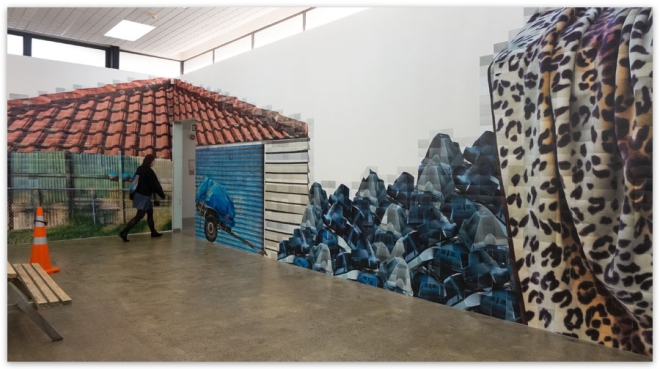 Before Artspace became Artspace it was called Artwork. In our storeroom we still have a broom with Artwork’ written on it in black marker pen, and someone has added an ‘s’ at the end in blue. This broom might be considered a synecdoche – a figure of speech in which a specific aspect refers to the whole thing, a container that is used to refer to its contents, and vice versa. Artspace was established in 1987 through the will and commitment of a group of motivated people (artists, critics, civil servants, an accountant). Using public funding the group took over a low-rent space in Central Auckland, an area that was unfashionable at the time. Not long after Artspace’s arrival, the area became sought after by urban developers, forcing the gallery to move from Federal Street to Quay Street, then up to Karangahape Road, where Artspace has been since 1997.

Artspace was set up to host experimental art forms that were not considered part of New Zealand’s canon 26 years ago. From day one the institution has been engaged in a dialogue with local and national communities, while also being open to international art discourse. What has ensued is a lively history of artistic breakthroughs, discoveries and consolidations.

Artspace has never been frightened to position itself as an ‘agonistic’ space, l recognising that new and critical approaches to art are often not easy to digest but that they contribute over time to transform how art is seen and perceived by the public. Artspace believes that art is about much more than offering a pleasurable experience to the viewer; it often has the responsibility to stir, challenge and question reality.

What politics are inherent to an exhibition space? What kind of reality gets framed in a gallery space? These are some of questions Artspace has been addressing through the years and what Hou Hanru, curator of the 5th Auckland Triennial, will tackle with the artworks exhibited in the gallery.

We live in a postcolonial world, one that has never attained an all-encompassing universality. We are constantly faced with a multiplicity of realities, which are contingent as well as coexistent. Public spaces are fragmented, their differences rooted in the economic, social and cultural and these differences produce audiences with varying expectations. ‘Where are you from?’, people ask me, recognising a foreign accent but unable to pinpoint its origin. I have been mistaken for a German, a Canadian, a Swede…

Even when I was living in London not many people guessed that I am Italian. When I moved to the United Kingdom in 2006 to do an MFA, I remember trying to make my accent sound as British as possible, mimicking the BBC English that’s raely heard in real life. This have changed since then, and along the way I have just accepted my intonation. I have started taking pride in my points of difference and have come to the conclusion that I shouldn’t shy away from the nomadism that has characterised my life so far. This instinct brought me to live in New Zealand in 2011, when I set off for a new challenge testing out new geographies and cultural coordinates. The artists showing at Artspace for the Triennial bring multifaceted views of the world to Auckland. Curator and writer Gilane Tawadros in an article from 2009 ask ‘How can you speak to and of other cultures’ as well as negotiate difference not by assimilating it or neutralising it or by exoticising it?'[2] This is the very challenge the 5th Auckland Triennial is embracing, and it is certainly a central concern for the artists invited by Hou Hanru to exhibit at Artspace.

Paris-based artist Bruno Serralongue has with photography been covering events in many corners of the world, including Korea, Kosovo, Chiapas, Tibet and India.His work is borne out of negotiations between the blurred boundaries of what is considered ‘art’ and what might be counted as ‘information’.

Yto Barrada has chosen to live in Morocco, after Paris and New York. The city of Tangier offers her a postcolonial case study full of spatial ambiguities, an aspect that comes to the fore in her photographic works. Representation appears to be broken and distorted, mirroring the fluctuation between the categories of emigrants, immigrants or expatriates.

Our neighbour, The Film Archive, is screening a collaborative film essay by Allan Sekula and Noël Burch. Chronicling the vast and sprawling maritime world, the film shows the space of the sea to be both crucial to the global economy and at the same time forgotten, obsolete.

Chantal Mouffe maintains that it is ‘impossible to determine a priori what is social and what is political independently of any contextual reference’. Furthermore, Mouffe rejects the idea that pluralism could ever achieve a ‘harmonious ensemble’.[3] There is no such thing as unity or the ‘possibility of (a) final reconciliation’. What we are left with are attempts as grasping a whole, even if we understand it will never be accomplished. All we can do is rejoice in the moments of familiarity or repetition present in the artworks.

The soothing portraits in Sydney-based Angelica Mesiti’s four-channel video installation Citizens Band, 2012 take us on a visual and musical journey arounnd the world. Brazilian artist Cinthia Marcelle is present with the video Automóvel, 2012; at first a seemingly simple recording of traffice flows across a busy street which unfolds to reveal a surreal portrait of the relationship between humans and our vehicles.

The upbeat videos, photographs and Installations of Auckland-based, Māori/ Niuean, Samoan artist Janet Lilo look at ideas of community in New Zealand. Through her works we perceive a shift in pace; and the feeling of displacement we experience starts dissipating and turns into the recognition of a familiar place.

We do live here.